Breathing life into a high art

In the glass manufactory von Poschinger in Bavarian Forest glass has been blown since 1568. Still, the manufactured products are everything other than old fashioned. Benedikt von Poschinger leads through his familys business. 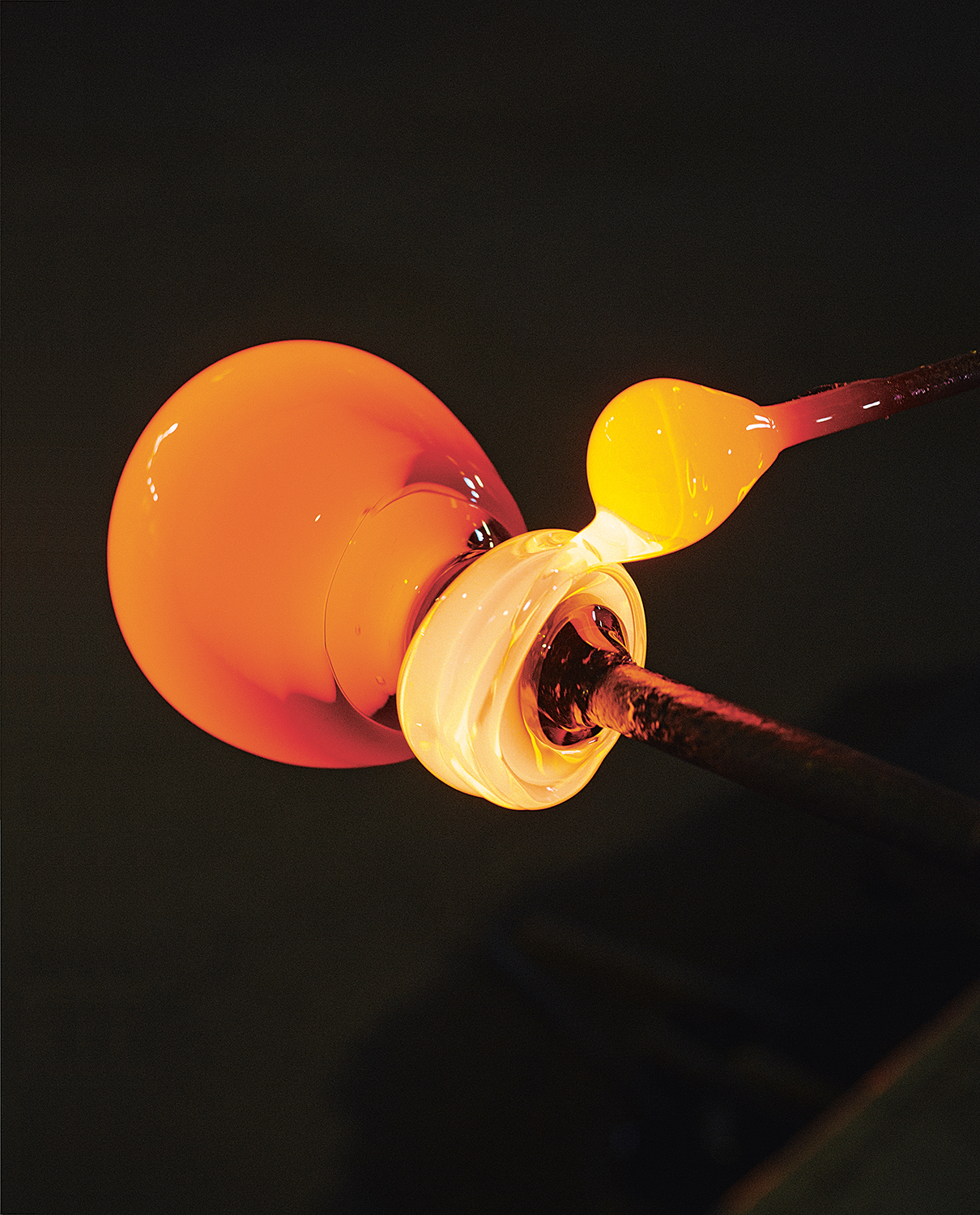 A rim of liquid glass is placed on the blown glass sphere, the so-called Kölbel, which is knocked off when the glass has cooled down.

Benedikt von Poschinger sports a casual-looking jacket, jeans and a buttoned-up shirt, and his blue eyes exude a warm and friendly demeanour. This sets him apart from his ancestors, who look down from paintings at the glassmakers in the kiln hall with a severe expression. Benedikt Freiherr von Poschinger von Frauenau is part of the 15th generation to run the Poschinger glassworks.

Above the paintings, goblets, glasses and vases are tightly stacked on shelves right up to the ceiling, dull and grey owing to the smoke from the furnaces. All of
these objects were manufactured at Germany’s oldest glassworks, which has been owned by one and the same family for longer than any other company in the world. The fact that it has survived is thanks to Benedikt von Poschinger and his versatility.
In Frauenau, which dubs itself “the glass heart of the Bavarian Forest”, not much remains of the time-honoured tradition of glassmaking. Grass grows over the dilapidated Spiegelau factory in the village centre. Many glassworks didn’t survive the competition from Slovenia and the Czech Republic that came when Eastern Europe opened up in the 1990s. At other glassworks, glass is made only for show. Tourists can watch a vase being made and even blow a glass sphere themselves that they can stick in a flowerpot at home.
“Like all glass companies, we started out life in manual mass production,” says Benedikt von Poschinger. His father produced sets of drinking glasses for companies such as Rosenthal and Villeroy & Boch, brought out his own collection several times a year and took it to trade fairs. In 1990, Benedikt von Poschinger experienced the upheaval as a young man. Business models that had been built up over decades suddenly no longer worked. The fact that he had been acquainted with them since childhood was an advantage, and his
capacity to look beyond these structures likewise stood him in good stead.
He realised that this ancient craft couldn’t simply be continued as before, but that it had to be modernised – with the help of objects such as the Bell table with its heavy glass base, with which Sebastian Herkner had launched his career as an internationally renowned designer. Partnering with Herkner was an important step for Poschinger towards specialising in orders from the worlds of architecture as well as lighting and interior design.

Benedikt Freiherr Poschinger von Frauenau is the full name of the owner of the glass manufactory. 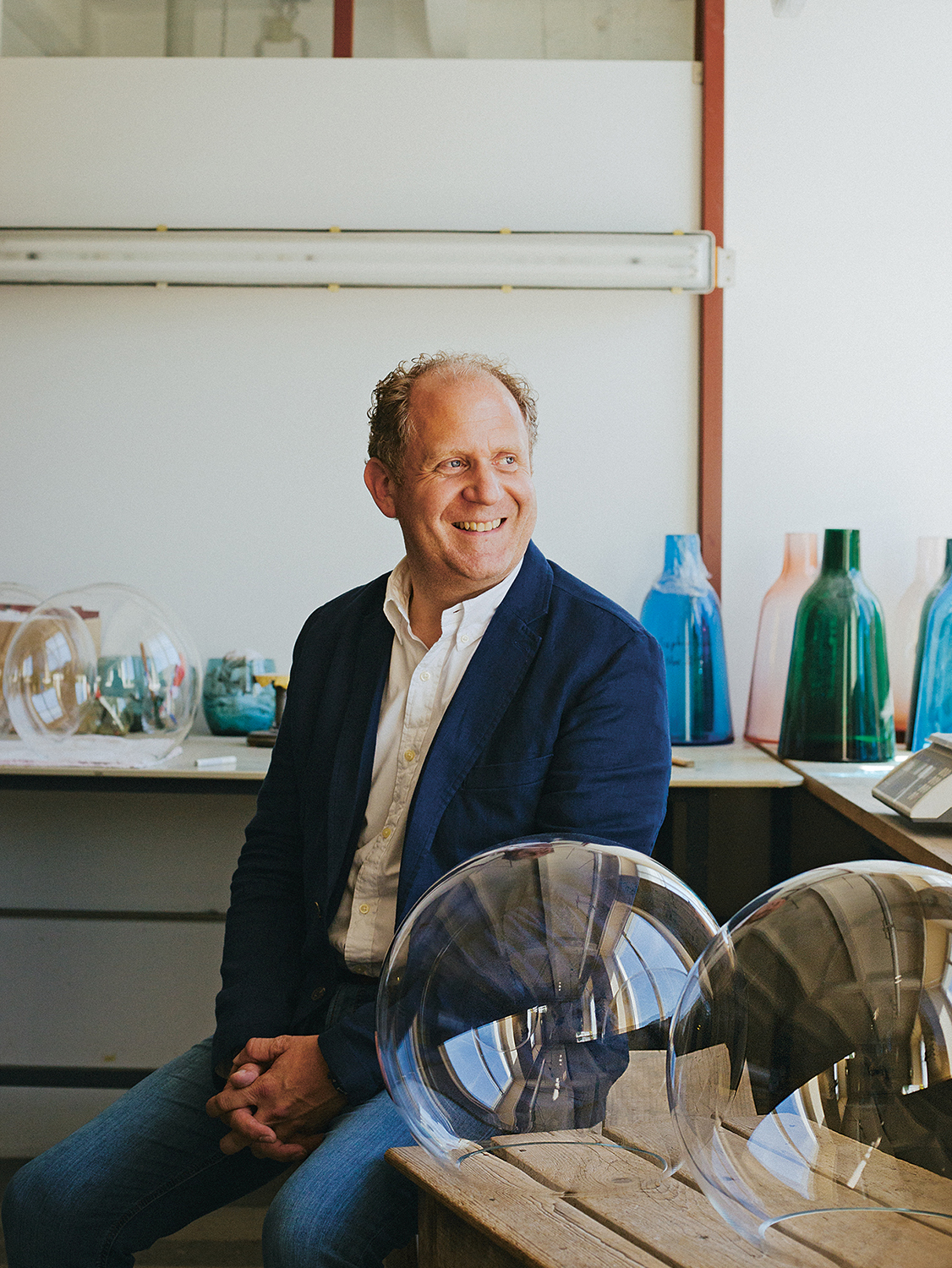 Positioned for the future through cooperation with young designers

The manufactory was founded by Joachim Poschinger in 1568. It flourished, and industrialisation gave it a further boost. In 1875, a great-uncle of the Poschinger family had a castle erected on the hill, which was home to various European nobles. The rundown castle was torn down again in 1959, however. Von Poschinger isn’t too sad about this.
“I’ve got my work cut out with this,” he says, gesturing towards the stove atop a pedestal in the middle of the hall. The glassmakers bustle around the furnace as if they’re acting out a scene from a play carefully choreographed over the course of many years, using long pipes to fetch molten glass from one of the four hatches. They first take a small amount, which hangs like a drop at the end of the pipe. If gravity were left to its own devices, it would drip down like viscous honey. To prevent this from happening, they keep turning the pipe, which rests on a U-shaped support, and blow into it, creating the beginnings of a small, hollow shape.
It’s impossible for glassmakers to stick to a strict plan. They have to keep a watchful eye on how the glass behaves. The colour tells them how hot it is – first
glowing light orange, until the colour the glass will end up having finally shimmers through. The men – there are hardly any women, because the work is physically so har – know exactly when they have to put the gob of molten glass back into the glass mass in the oven to get the next layer of glass, which makes the first layer hot enough again to allow the glassmaker to enlarge the hollow shape, before blowing it into its intended shape in a hollow wooden mould. 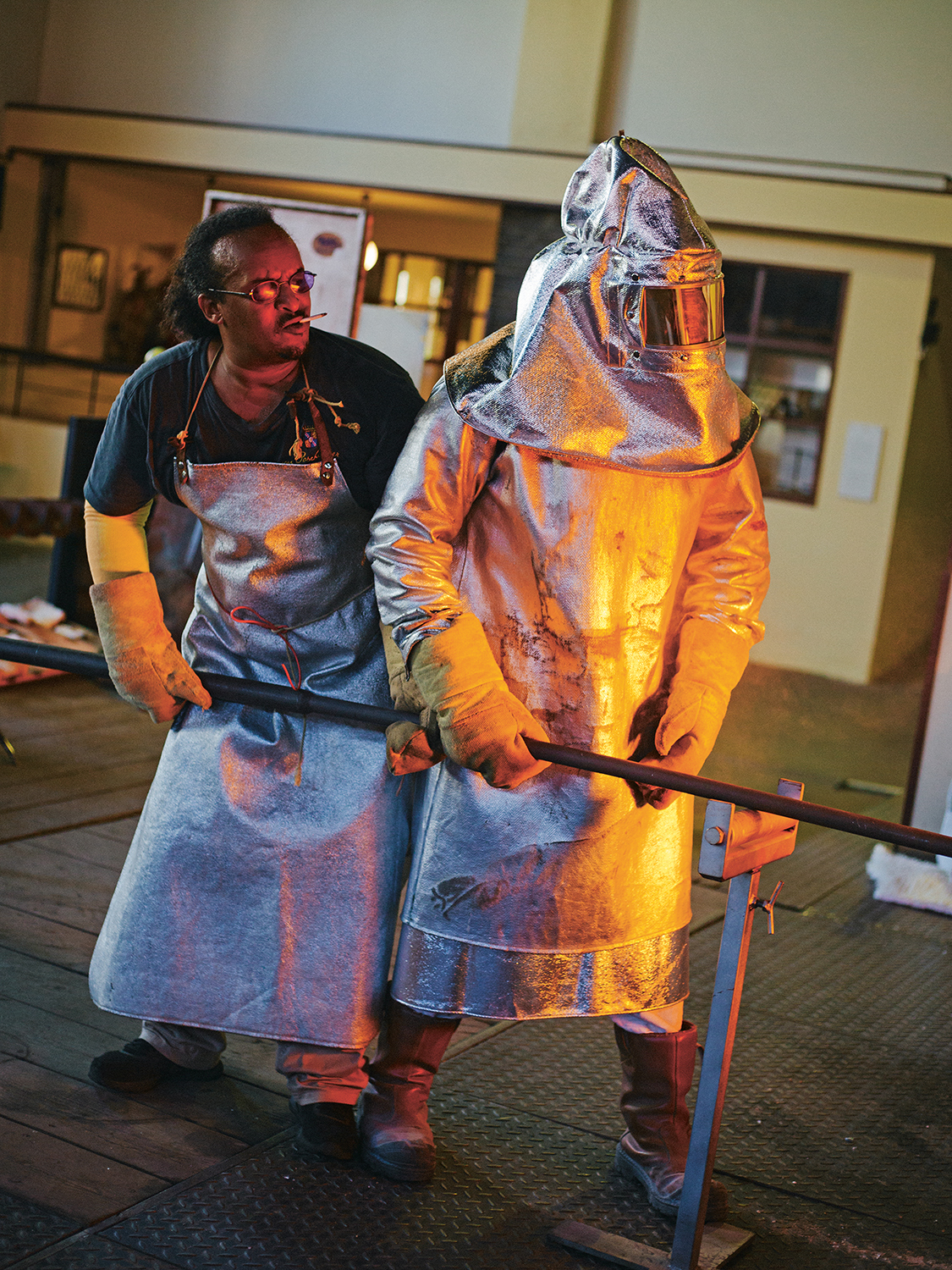 LEFT:
David Arha (left) and Miguel Schwenk have to watch out for the blazing heat of the kiln.

The craftsmen complete the glass base of the table in the morning. This is heavy work, weighing more than 12 kilos when suspended from the pipe. Everyone knows what to do next. Master glassblower Christian Hagl places the finished base onto a fork-shaped stand to allow it to cool. David Arha stands ready to place the glass in another furnace, which is heated to 500 degrees and cools down to 40 degrees after three and a half hours. If the glass were simply left to cool in the air, it would shatter.

After the glass is transported on a conveyor belt to the other end of the furnace, it proceeds to the cold glass processing stage. It is cut and ground while small scratches are polished and the glass is examined for tiny defects. Only then is it ready for packaging.
By collaborating with designers and artists and producing individual orders, the glass manufactory has not only been able to maintain its good reputation, but has positively thrived – with 35 employees by the last count. After the six-week production stop due to the lockdown, they have a considerable backlog of orders to work through, including the interior lights of a private plane.

The edges of the lampshade are cut and polished in the cold glass processing. Here every product is checked for the smallest defects. 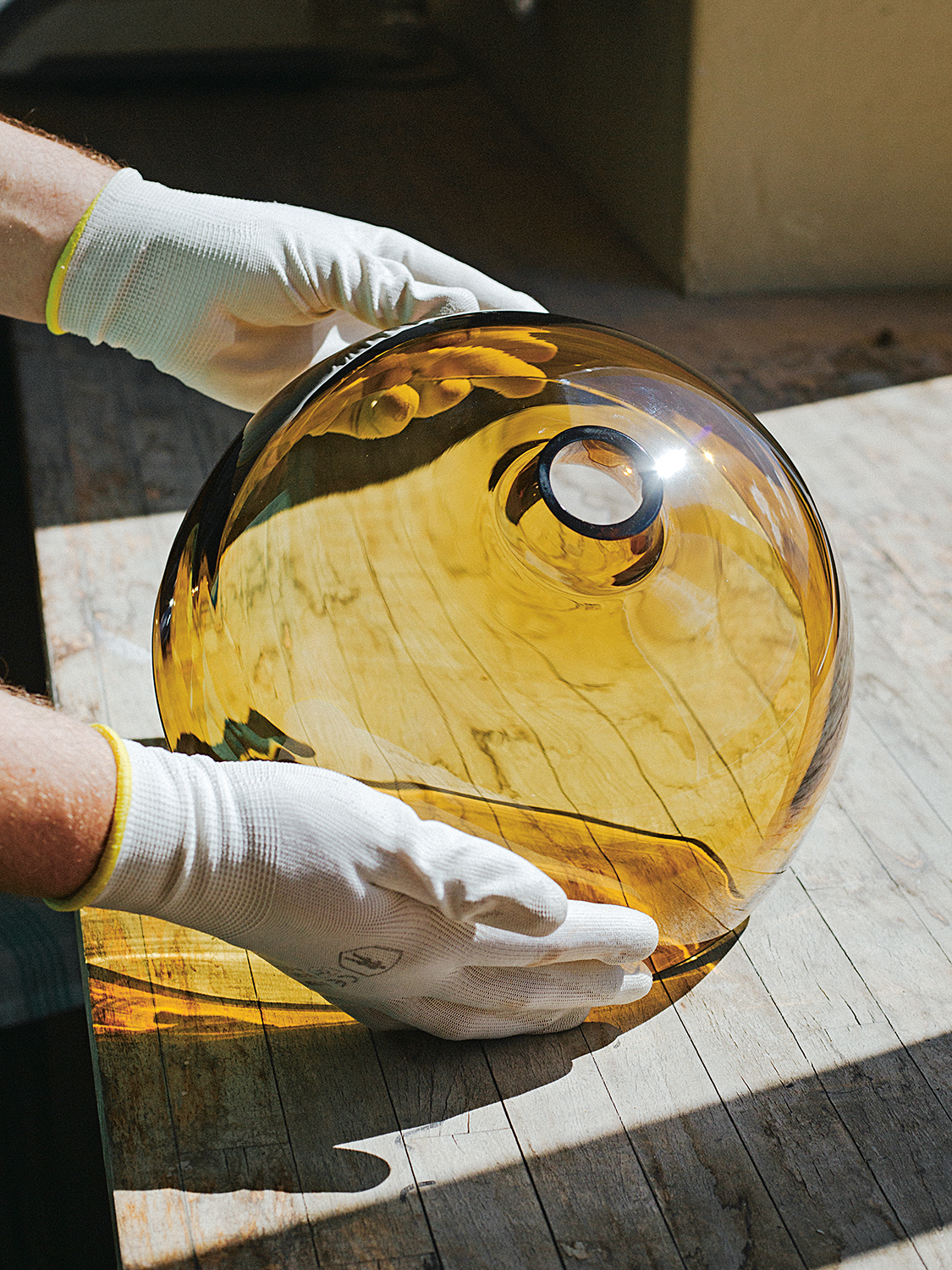 Doing something else was never on the cards

Von Poschinger takes the time to show us round his company, and the 49-year-old radiates a sense of calm that also has to do with the certainty of knowing his place in the world from birth. His family didn’t force him into the role of successor. “For me, there was never a question of wanting to do anything else,” he says.
The glassmakers are taking broken fireclay rings out of the kilns to replace them with new ones. The rings float in the four docks, round vats in the furnaces. The
mass of soda, lime, quartz and potash is melted into liquid glass.
When the ovens are opened, the men feel the full force of the searing heat and the stage is transformed into a menacing-looking scene. Clad in his silver-coloured protective suit, the young apprentice Miguel Schwenk looks like a diver, buckets of sweat streaming down his face. “I drink ten litres of water a day,” he says with a smile. Even this facet of the glassmaking trade seems to please him. And also, the fact that he has learned how to blow glass while puffing a cigarette dangling from the corner of his mouth.
In January, the 24-year-old is due to start technical school, and Benedikt von Poschinger hopes that he’ll come back once he’s done. Europe’s leading glassworks have set up exchange programmes with a view to retaining good employees. So perhaps Miguel Schwenk will soon be making glass in Venice on the island of Murano, a traditional glassmaking hot spot.
His boss didn’t learn the craft of glassmaking, but is a qualified forester. Wood and glass have always belonged together in his mind’s eye. In the Bavarian Forest, there’s always been a lot of wood for firing the ovens and the quartz in the soil. “As a company, we dabble in agriculture, forestry and manufacture. My grandfather was also a forester and my father studied economics,” he says. “Whatever floats your boat.”