State of the Bart

Would you like a millimetre extra? Barbershops are more than just glorified hairdressers for men. They are a spa, meeting point and retreat. Visiting Miguel Gutierrez, famous as Nomad Barber in Berlin, London and on YouTube 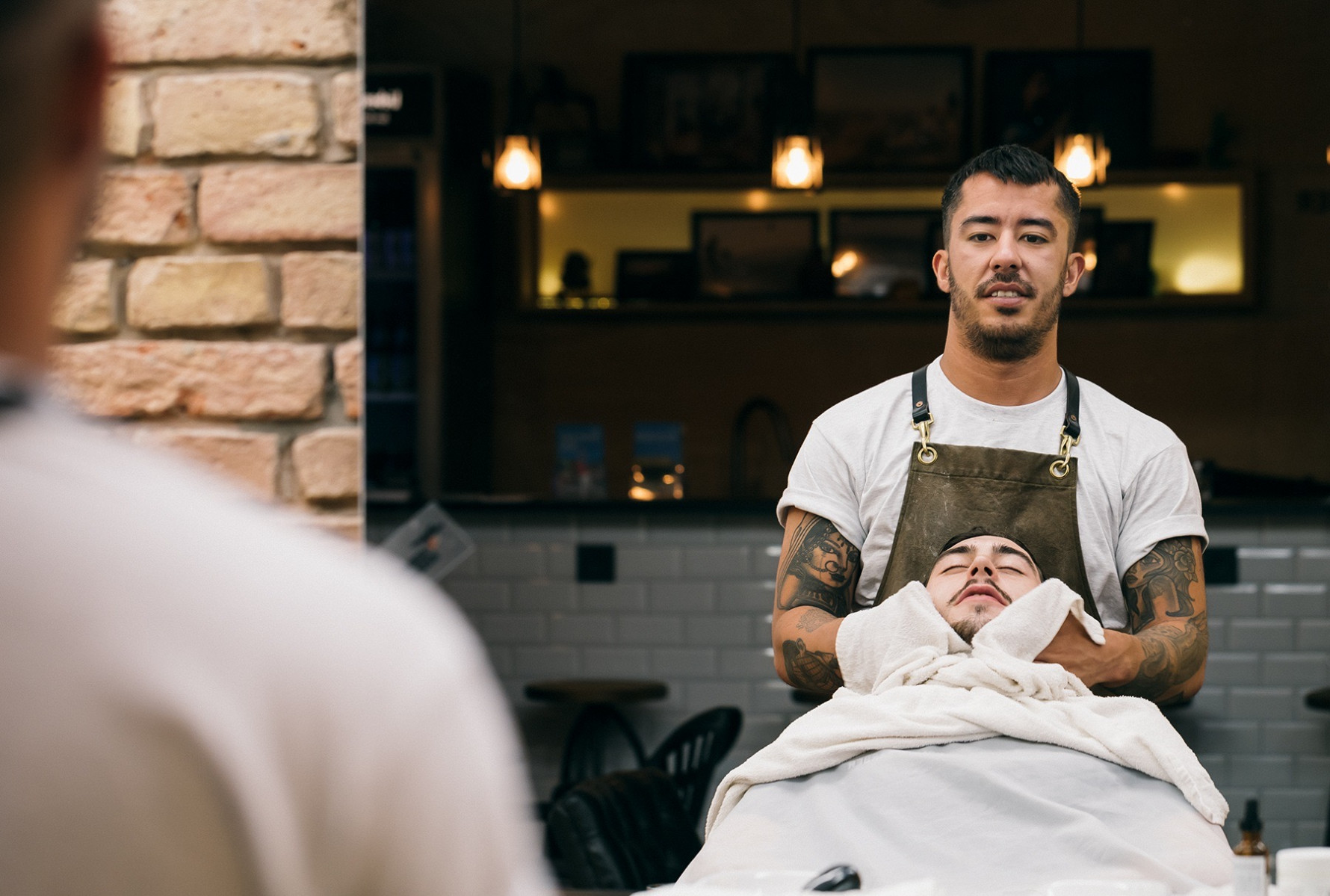 On an early morning in Berlin-Kreuzberg, Miguel Gutierrez welcomes his visitors with a strong British accent: "Good mornin'!" The man in his early thirties takes another deep drag on his cigarette before he leads us in, passing a coffee machine and luminous letterings, down into the basement, where his Berlin clientele takes a seat in leather armchairs. In the barber scene, Gutierrez is known as Nomad Barber. For 14 years, he has been cutting, shaving and grooming his customers' hair. In addition to his Berlin store, he runs another one in London. Gutierrez became famous in 2012 when he went on a journey around the world round-the-world hile releasing his web series "Nomad Barber" on YouTube. In short videos, he documents the craft of dfferent barbers from various countries.

Mr Miguel Gutierrez, 14 years ago, back in the day, you were only 16 and you decided to become a barber. A picture is said to have sparked your interest. What is so special about it?

The picture shows my father and his brother - both of them were barbers. They looked so smart standing in front of their shops wearing their white coats.

Why did this leave an impression on you?

The friend of my father's had four stores - that impressed me. I am from Liverpool, not from the best, but also not from the worst part of town. Here, you decide on a job and then stick to it without considering other options. However, my father's friend followed a different path. Every time I saw him, he was driving another car, he was travelling all the time and was generally just doing his own thing.

Did the barber's trade appeal to you as well?

I always liked going to the barber, especially because of the atmosphere. What I liked most about it was the idea of opening my own business. I wanted to be a businessman making money. When I was still in school, I sold sweets to my fellow students after lunch.

Your timing was excellent: the barber business has been booming for years. When did you first realise that you might become part of a huge trend?

I became aware of it quite late. Compared to Germany, Great Britain always had plenty of barber shops, although not as many as today. Nobody could have imagined how popular this is now.

Today, almost every town has a hip barber shop. How did that happen?

As everywhere else, trends are spreading at an incredible pace through social media. Somebody might start running a cool barber shop in London and suddenly copies of it start to pop up in Liverpool, Manchester, Newcastle - with the same interior, the same accessories.

Nowadays, men seem to have a renewed interest in proper attire, celebrating their vanity, investing in grooming their beards. Have barber shops had anything to do with this?

For a long time, barbers had a very bad reputation. In the 1970s and 1980s, long hair became popular among men. As a result, they rarely had their hair cut. This meant that they had to compete for every single customer, and so prices dropped. At the low point, a haircut only cost three pounds instead of 20. Barbers had to be quick in order to make any money at all, and so quality suffered. Today, things are the exact opposite: going to the barber is like going to the spa. They offer drinks, facial massages, grooming - due to the fact that men have a revived interest in vanity and therefore need places to celebrate this.

You have won numerous awards, have 100,000 follower on instagram, about 130,000 subscribers on YouTube and shops in London and Berlin. You even have more plans: your very own webshop and care products. When did you realise that you could become a brand yourself?

I realised that when I first started travelling and running my web series "Nomad Barber". Brands started to contact me, asking if we could collaborate. Back then, they were only small projects; recently, I started working with Audi and Visa.

Your first trip lasted a year. You travelled five continents, met countless barbers and portrayed them. What did you learn during this time?

For me, it was never about the technique that others use. I was interested in the people themselves, the places. I was keen to find out about the living conditions of people working in the same profession. How do you become a barber in India? What are these people's goals? Do they do it because they want to have a career? I couldn't find anything about it online - and so I set out to find the answers myself.

What social status does a barber have in India?

The Indian society is strongly a ected by the caste system. The barbers come from the bottom. Most of their fathers were barbers themselves. What struck me most was how content these men were. They were happy - even though their customers don't treat them well, and even though they show them who's in charge every single second.

Grooming is very important there and barbers are respected. You'll never encounter a man with long hair. The beards are trimmed perfectly. Somebody will move around serving tea all the time. Us barbers all use the same tools. Technically, we speak the same language. However, the rest is what makes us so dfferent from each other. In India, people start working at the age of 12 because they have to. In Great Britain, people might start to work at the age of 40 to realise a long-held dream.

Would you like to receive MÜHLE's 30 Grad magazine free of charge by mail?