Take a deeper look inside the MÜHLE Museum

Nestled away in the lower ground floor of our Carnaby nook is the MÜHLE Museum. Adorning the walls of MÜHLE London Barbershop, it’s a homage to the tradition and ritual of shaving. The collection comprises of shaving exhibits that span several centuries, characterised by a fine and luxurious touch. 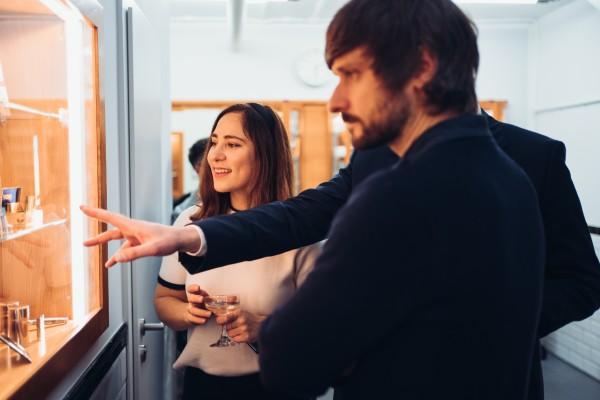 Shaving as a Luxury

For a long time, regular shaving was a privilege only available to those with deeper pockets. The innate luxury of this care ritual was expressed in elaborate shaving utensils, consisting of painstaking artistic details and precious metals like silver. The invention of new shaving tools for men meant that the ability to be smooth cheeked no longer relied exclusively on access to a barber and the spread of self-shaving began. However, this male intimate ritual continues to be an experience that is treasured and ceremonious- the tools surrounding it upgraded to luxury goods by their shapes and materials used. Indeed, the tools have become a form of subtle and not so subtle self-expression decorating bathroom sinks and countertops saying a little something about the person who uses them. In many ways they reflect the faces that they cleanse, massage, exfoliate, sculpt and shear: groomed and recreated to convey gentility, charm and individuality.
Weekly set of straight razors. You can see a different day of the week inscribed in German on each razor. The detail on this set is breath-taking, when removed from the case an eagle eye can be seen on the hook, each razor a depiction of this masterful bird of prey. 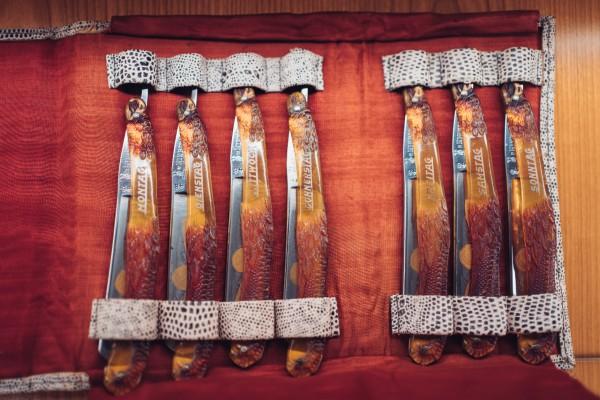 In the Beginning There Were

The argument for a set such as the one pictured above was the assumption that the steel had to rest after use for the benefit of ideal cutting properties. Due to the high purchase prices of a weekly set they were not widely available.
From the Bronze age until the end of the 19th Century, straight razors were the exclusive weapon of choice when it came to shaving. This popular tool reached its peak in terms of industrial production in the second half of the 19th Century. In the early days of the straight razor hardly anyone shaved daily or mastered the craft well enough to shave with a straight razor. You were regarded as well-shaved if you got shaved once a week- usually at the local barber. Wealthy people and noblemen underpinned their status by being shaved daily. The straight razor was a precious tool for the barber as well as those who shaved themselves. It was not unusual to bequeath it over many generations.
Sheffield here in the UK, Thiers in France, as well Solingen, Germany were the European manufacturing centres in which straight razors had been produced in large scales in the mid-19th century. Thereby, straight razors became affordable for average earners too. 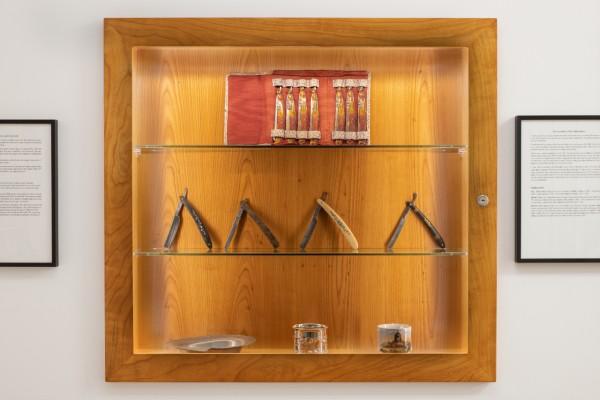 As mentioned above, the top-shelf showcases a weekly set of straight razors from Germany.

The middle shelf features a straight razor from Solingen circa 1900, handles have inlays of mother-of-pearl and silver wire. A horn engraved handle with motifs that symbolise the 4 seasons also sits on the middle shelf, this British made razor presumably came from Sheffield.

The bottom shelf has a shaving bowl with neckline tin (Germany, 1861), a shaving mug made of sterling silver from Rhode Island, USA circa 1910 and a German moustache cup circa 1900. These enjoyed great popularity between 1860 and 1920, as prominent moustaches and beards worn by the likes of Prussian Kings Wilhelm I and Wilhelm II corresponded to perceived images of masculinity. Handy moustache mugs meant that a cuppa never got in the way of a well-kept beard (and vice versa).

Special Edition of a safety razor in a casket , gold plated case, Gillette Boston, USA circa 1920 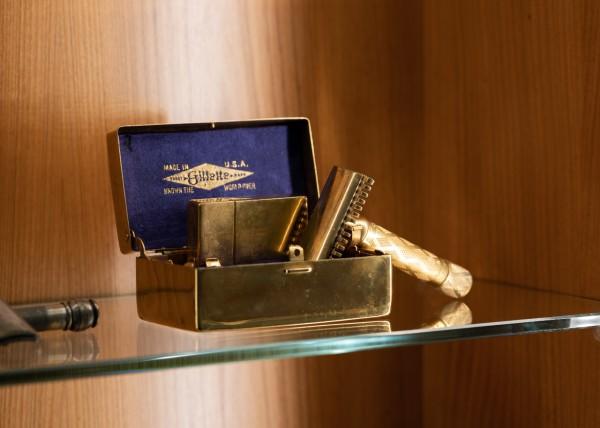 The Evolution of the Safety Razor

A ‘safety razor’ is a shaving implement with a protective device positioned between the edge of the blade and the skin to reduce the level of skill needed for injury-free shaving and thus reliance on barbers. The first known occurrence of the term ‘safety razor’ was patented in 1880. At this time safety razors were produced in Europe, based on replaceable cutting edges that can be sharpened and were similar in shape to the straight razor blade.
Safety razors were popularised in the 20th Century by King Camp Gillette’s invention of the double-edge safety razor. While other blades had to be honed by a cutter, the double edge razor used small blades that could be changed at home with two sharpened edges. Gillette’s invention became the predominant style of razor during and after WWI when the U.S. Army began issuing Gillette shaving kits to its servicemen. 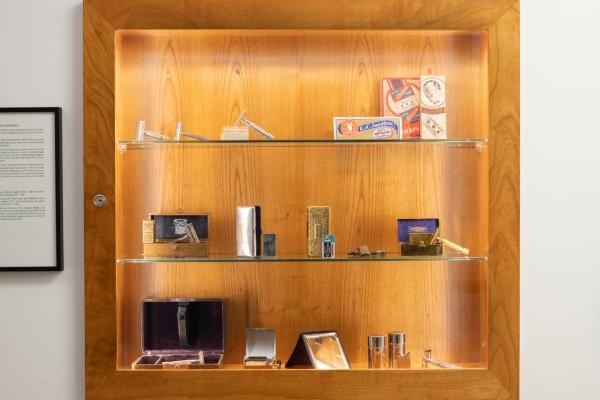 At the MÜHLE Museum several Safety Razors or Double Edge (DE) Razors, as they are also referred to, feature. On the top shelf, you can see a silver-plated safety razor of the company Zwilling, Solingen, 1950 – 1960 and razor blades also from Germany 1930 – 1950. The middle shelf features one of the very first safety razors, a Wilkinson hybrid between the straight razor and 2-blade safety razor from the end of 19th century and the Gillette Special Edition as mentioned above. On the bottom shelf, we have Gillette silver plated and velvet-lined travel case for razors, circa the 1920s. There is also a sharpening tool for razor blades.

In the 1970s, cartridge and disposable razors were introduced, where multiple blades are embedded in plastic. These became the predominant type of ‘safety razor’ however double-edge safety razors are now experiencing something of a renaissance as 21st Century consumers search for sustainable, plastic-free lifestyles. We often get customers in-store who admire our Traditional safety razors and say, "This looks just like the one my grandad used to use!" This renewed appreciation for the unique and considered craftsmanship of razors and shaving tools has, in turn, helped restore shaving to its well-deserved ritual status; with our skin, mental well-being and general self-care reaping the benefits. Iconic MÜHLE shaving brushes with handles made of semi-precious stones, Aventurine, Jasper and Epidote (1994 – 1999) feature in the MÜHLE Museum

Ready for a Beard Trim at MÜHLE London 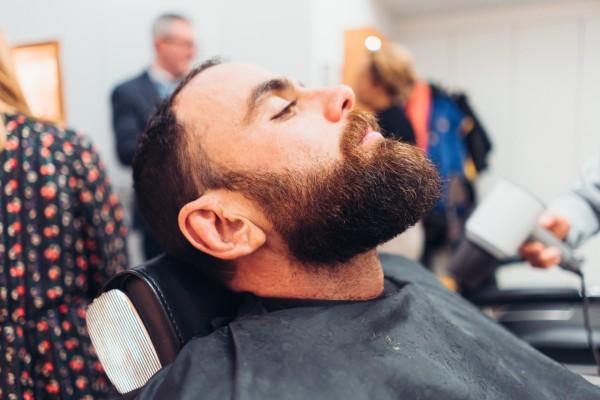 Shaving Today: Shaped, Sculpted or Sheared — It’s up to you.

With an array of choices including safety razors, cartridge Mach 3 or fusion as well as both natural and vegan brushes available in standard grades to silvertip, shaving kits are available to everyone for grooming rituals that can be enjoyed at home. Perceptions of a well-groomed appearance and masculinity have also evolved and are much more diverse, with everything from seemingly endless beards with a rustic air, to irresistibly smooth cheeked champions, and well-sculpted stubble wearers appearing in our newsfeeds. This diversity is supported in our collections with ranges that offer different razor head and bundle options, as well as styles from modern to classic with finishes in chrome, anodised aluminium, sustainable-woods, porcelain, and high-grade resin.
Further supported by our Barbershop which offers open razor shaves, beard shapes and self-shave tutorials, MÜHLE today reflects the ceremonious self-care, luxury and individuality that informs each of our grooming practices. 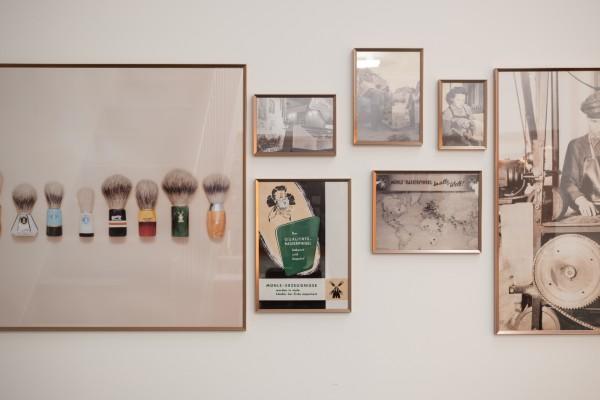 Gallery Wall at The MÜHLE Museum

MÜHLE Store London is open Tues — Sat 11am — 6:30pm and where possible we welcome guests to explore our Historical Shaving Exhibition on the LG Floor. However, if our barber is busy with a client be aware that we may not always be able to accommodate. To avoid disappointment, it’s best to call the shop the day before or morning of your visit and ask if there are any free slots where you can visit the exhibition- Tuesdays are usually a safe bet! Or even better book yourself in for some well-deserved manpering with Elliot and get the LG Floor to yourself to enjoy for an hour(ish)!
Find out more about the MÜHLE treatment space in London
Inscription réussie au magazine 30 Grad
Quelque chose s'est mal passé lors de l'inscription, veuillez vérifier si tous les champs sont remplis