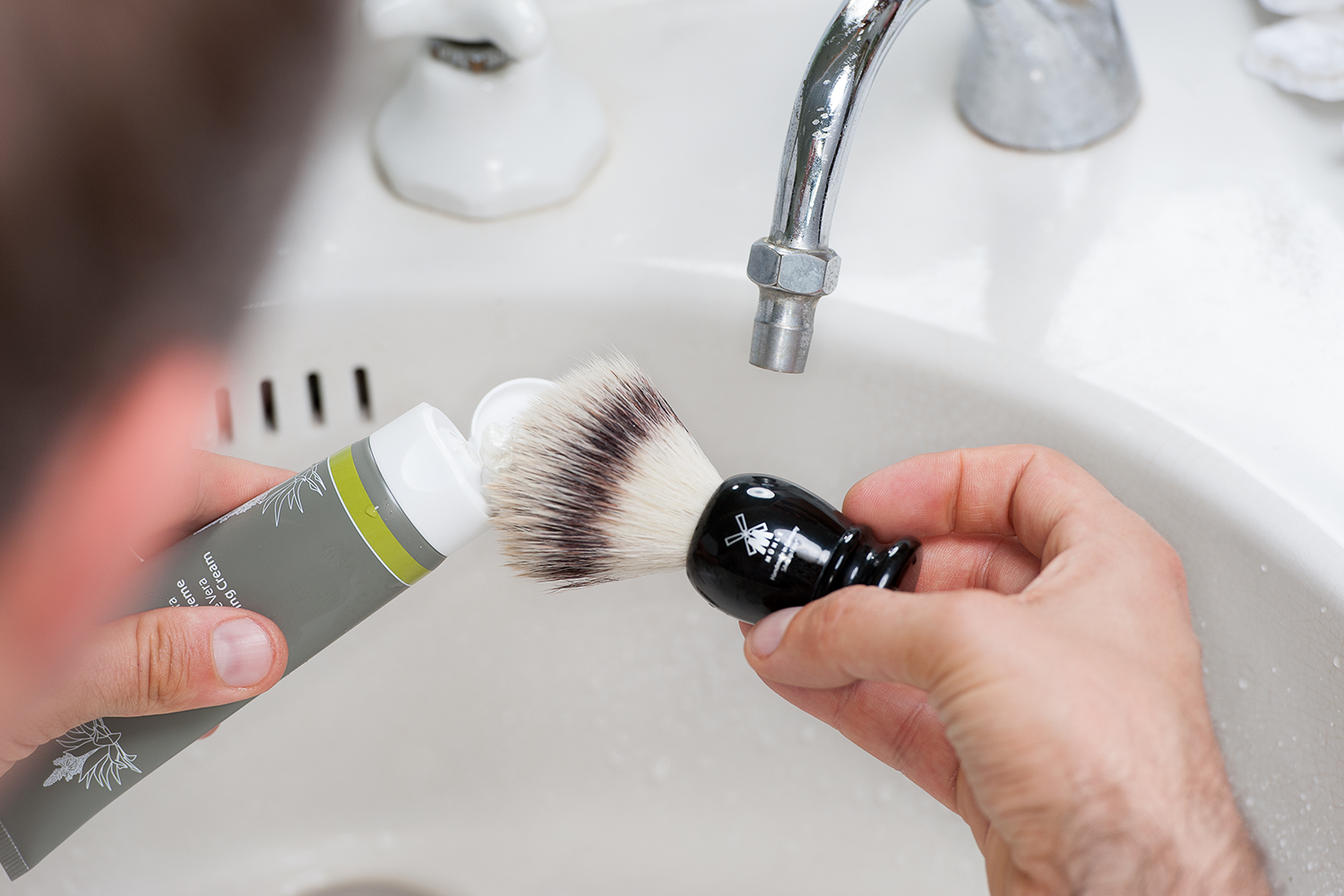 Aufschäumen means to lather up, which is the first step for any shave. What you need: shaving brush and shaving soap or shaving cream. Lathering is necessary to soften the beard. Beard hair is actually as stubborn as copper wire of the same thickness.

Barbers are well aware that the secret to a good shave is a good lather. Softened hair is easier to cut, because the blade does not pull at it, which can cause inflammation. Lathering also softens the skin and opens the pores, so the beard hair becomes longer, and so can be cut much closer.

The soap or cream should be applied to the face in a slow circular motion. This stimulates and cleans both skin and beard - something that regular shaving foam or gel does not do.

B as in Barber

Already in the days of the Roman Empire, the era of the barber was widespread. But the daily visit was not only about shaving and grooming hair, beard, and facial skin. The versed craftsmen were also always well informed. Still Thomas Buddenbrook, the main character of Thomas Mann's Nobel Prize winning novel, heard about the latest news and gossip while visiting barber Wenzel every morning, "who shaved only the crème de la crème."

In the Middle Ages, the barbers were in charge of primary health care: they practised bloodletting, took care of wounds, and extracted aching teeth.

When medicine became more professional and above all after the invention of disposable and electric razors the barbers' shops disappeared from the cityscapes - at least in the so called Western World. Yet they have returned with the newly awakened love for groomed facial hair over the last few years. 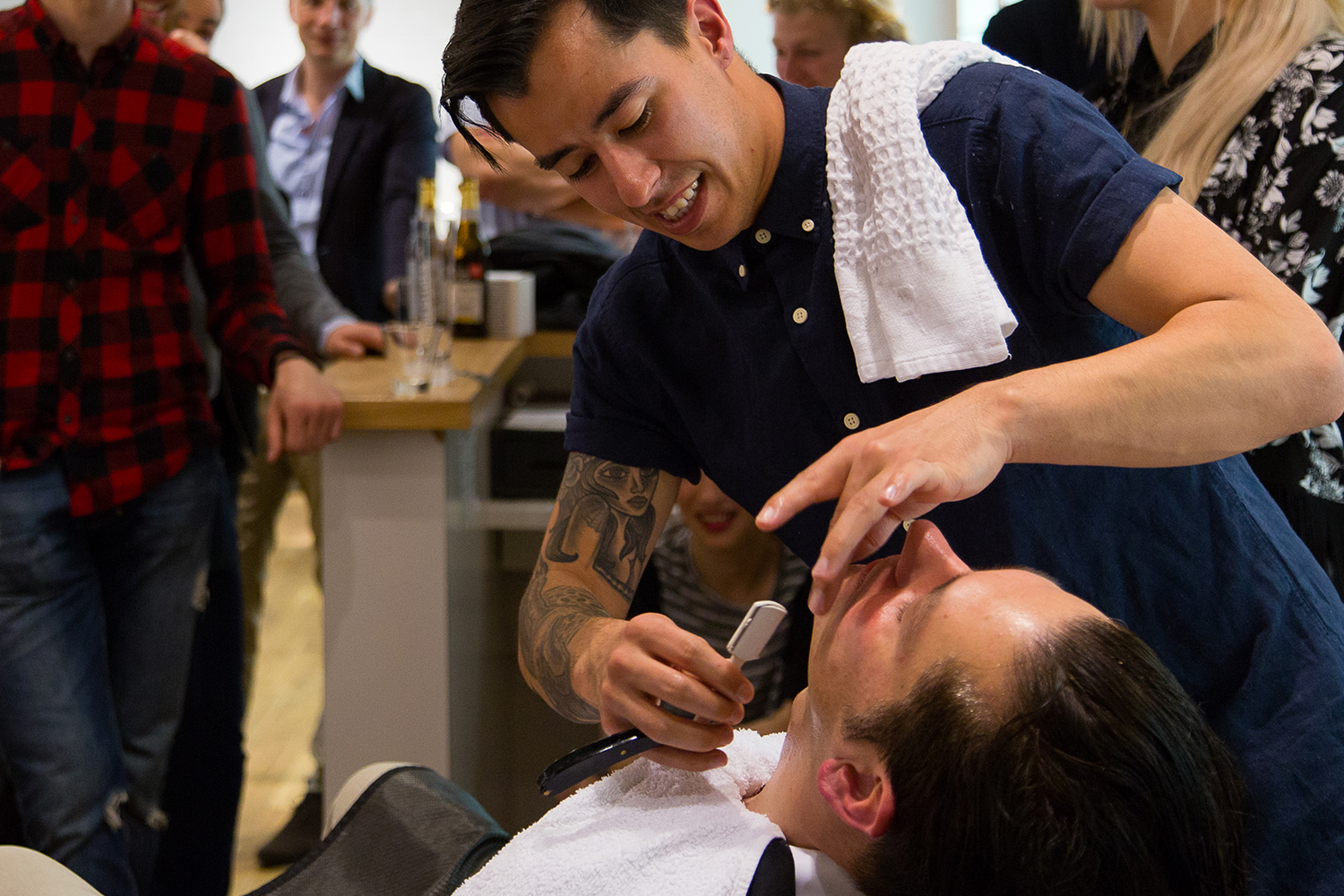 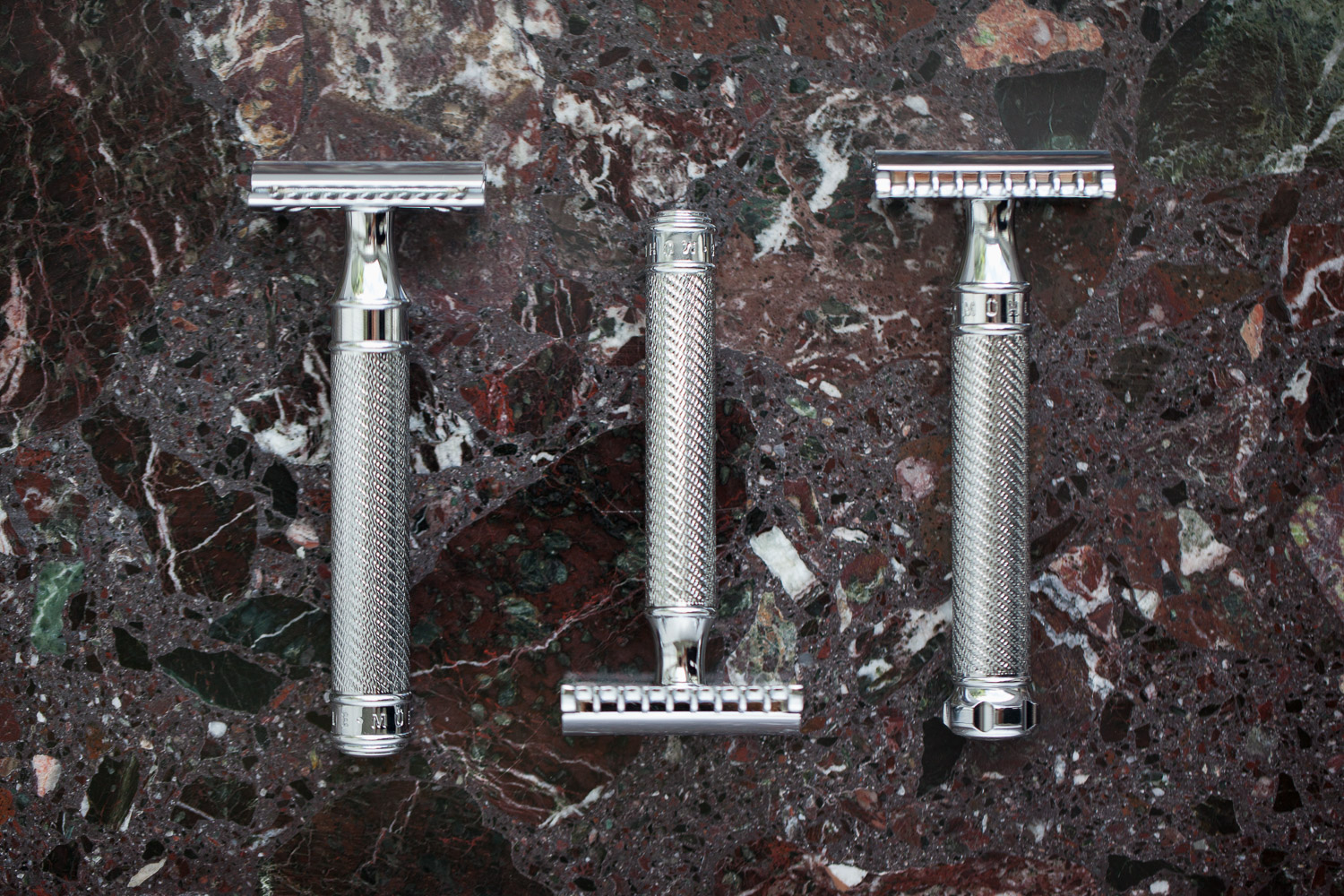 C as in Chrome

Chromium is in high demand. Not only in the Ore Mountains, the place where MÜHLE has been producing shaving brushes and safety razors for al- most 72 years. The strong, resistant and, above all, stainless galvanic coating is elegant without being ostentatious and easy to clean. In contrast to nickel it is not unhealthy. That is why it is also used in the bathrooms: for everything from water taps to fittings.

Nearly every MÜHLE product has a chromed part, for example the head of the safety razor or the bottom of the brush. The big challenge is to find a manufacturer who will chrome the products according to MÜHLE's aesthetic ideals. There is one partner who was tracked down in the Vogtland, Saxony. Who it is stays a strict company secret.

... hair of the badger. The badger is commonly called "brock" in fables. It is a marten-like carnivore that digs ornate tunnels with ist paws. The animal is of special interest to connoisseurs of the fine wet shave because of its fur. The hair is delicate and elastic and produces an especially creamy and thick lather.

The standard quality is the simple dark-grey hair. Then comes the fine light badger hair and then premium silvertip badger hair. Maintain it carefully and you will take much pleasure in your badger hair shaving brush for many years.

The brushes shoud always be rinsed and dried thoroughly. Together with a supplier, MÜHLE has developed an alternative: Black Fibre and Silverip Fibre brushes - two synthetic fibres even excel the using properties of the natural badger hair. 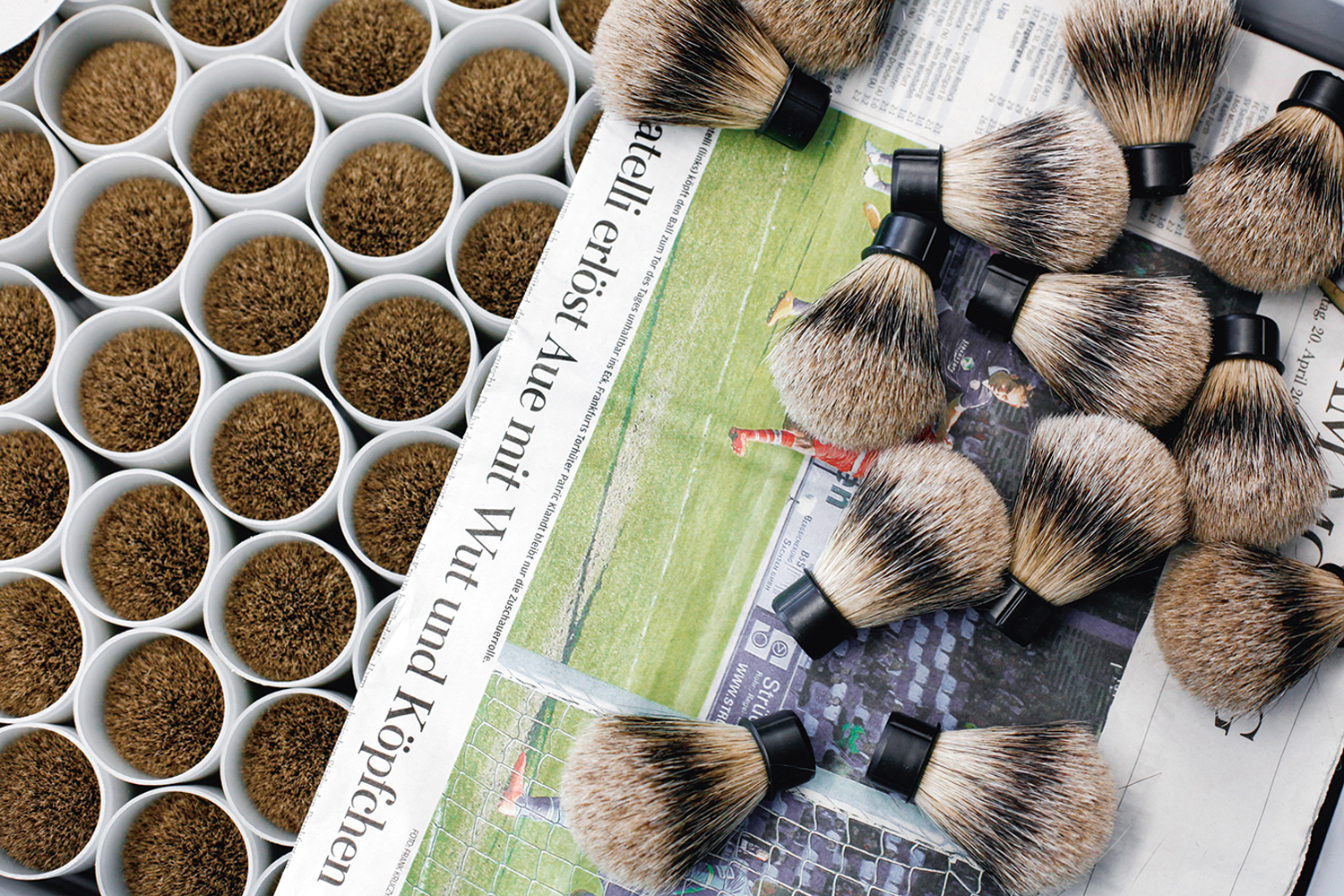 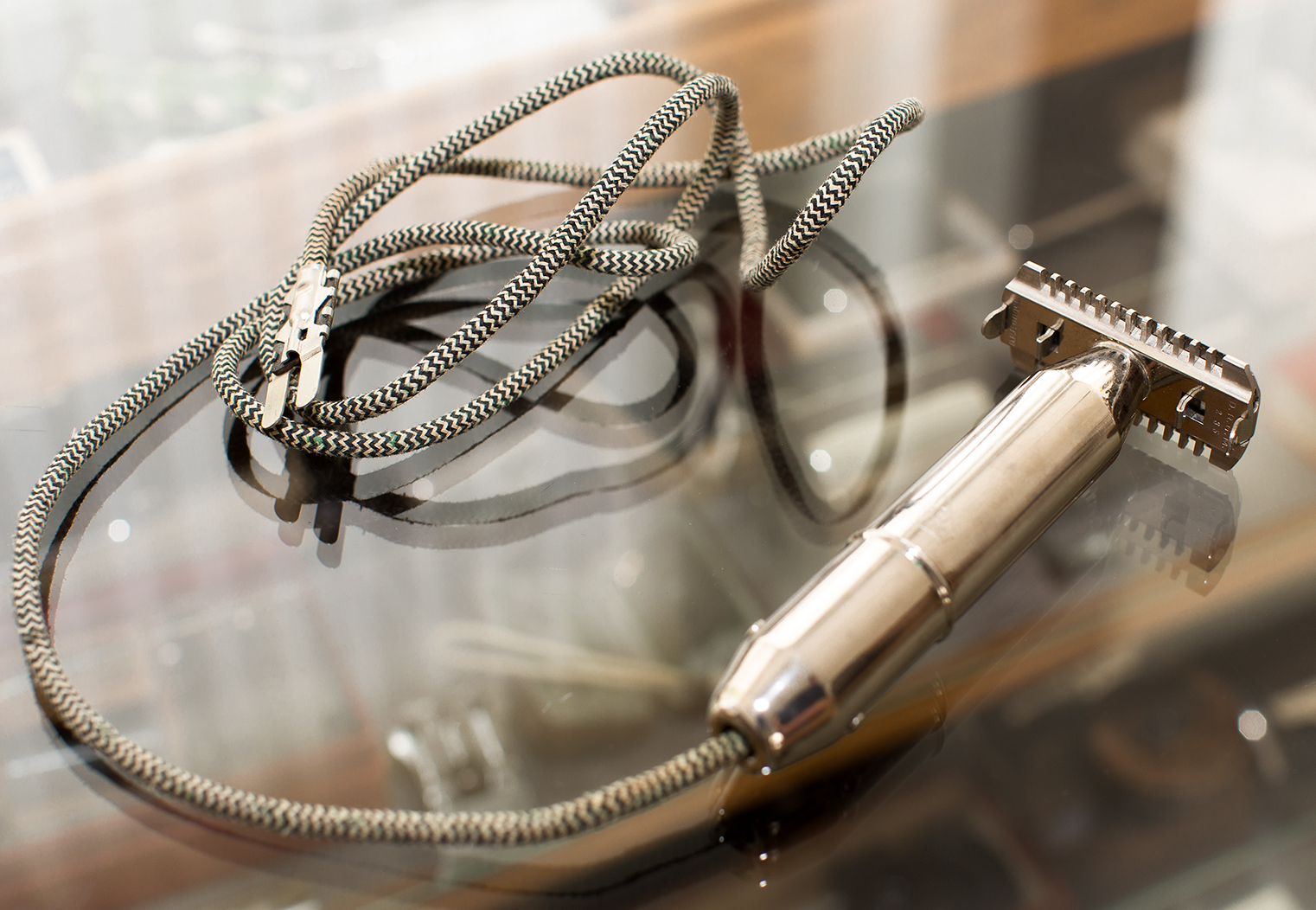 E as in electric shaver

Right before the meeting the young at heart manager takes the futuristic device from the drawer of his desk and gets rid of the five o’clock shadow on his face. That’s how progress looked in 1967. At least according to PR which was a huge success in this case. The amount of men using an electric shaver increased from 20% in 1957 to over 60% towards the end of the 1960s. Decades of trial and error had been preceding this development that yielded loads of useless devices.

It was the American Jacob Schick who pushed the breakthrough of electric shaving. While digging for gold in Alaska, he invented the motorised shaving head with which he conquered the American market. In Germany it was the Braun company that did that. Braun started the serial production of their dry shaver in 1950. Wet or dry is nowadays less a question of faith in progress then a question of personal preferences. What counts is the result. According to a study men on a date are more embarrassed by a five o’clock shadow then by unclean shoes.

F as in fibre

Fibre are synthetic polymer fibres for shaving brushes. They are coloured in such a way that they resemble natural hair deceptively real. Nevertheless, they are anything but cheap copies: The all in all seven different types of fibre make for perfect shaving properties. The tips are soft, still the brush has a strong backbone and thus does not open up when wet. Maintenance is easy and residual soap does not harm the Fibre. Mühle values tradition highly. However, one is not satisfied with doing things the way they have always been done. The creation of the Fibre brush is a real alternative to the classic badger brushes and this is not only relevant to vegans. Travellers among you may rejoice in this innovation: In contrast to a natural hair brush the Fibre brush can take it to be stored in your bag when wet. 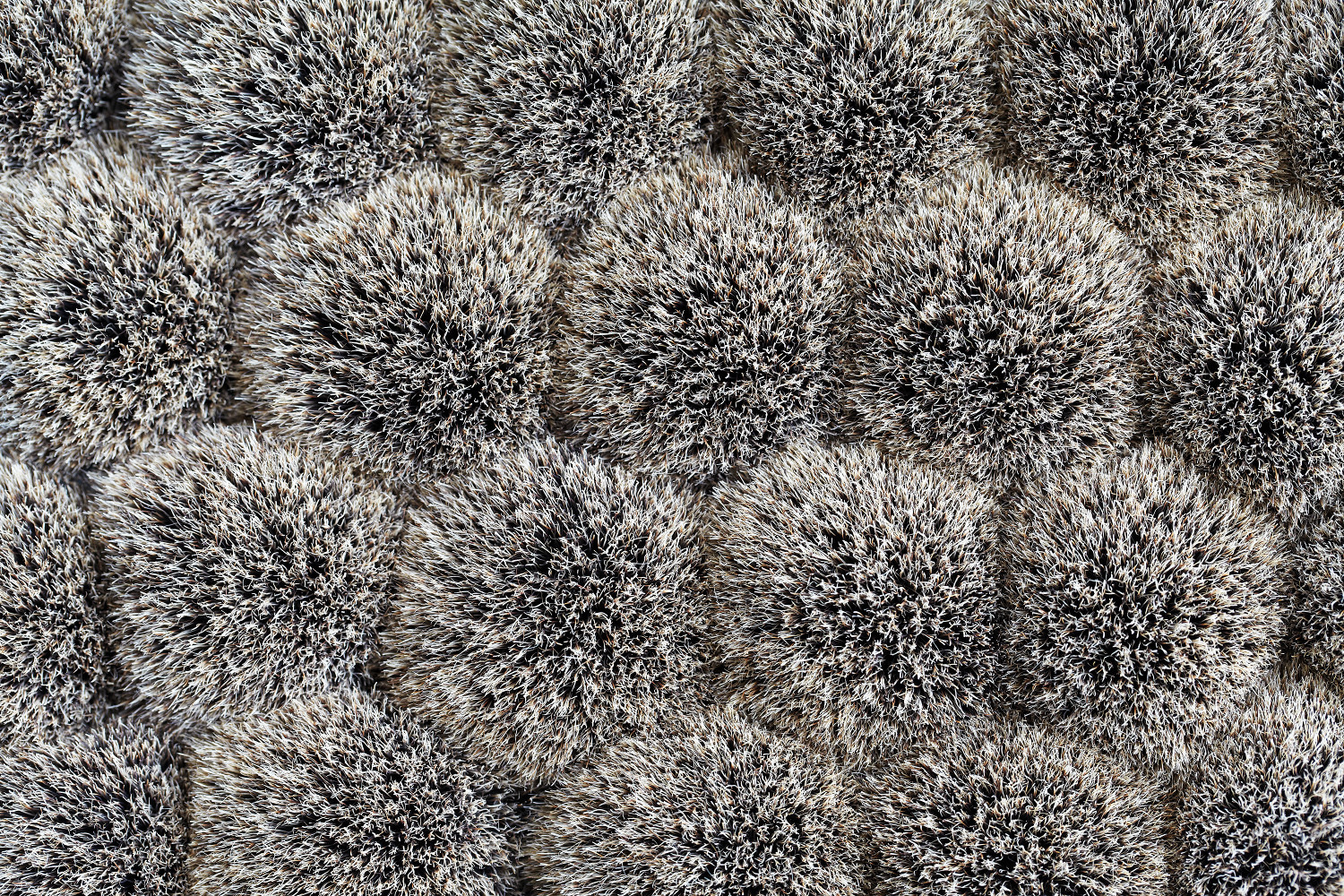 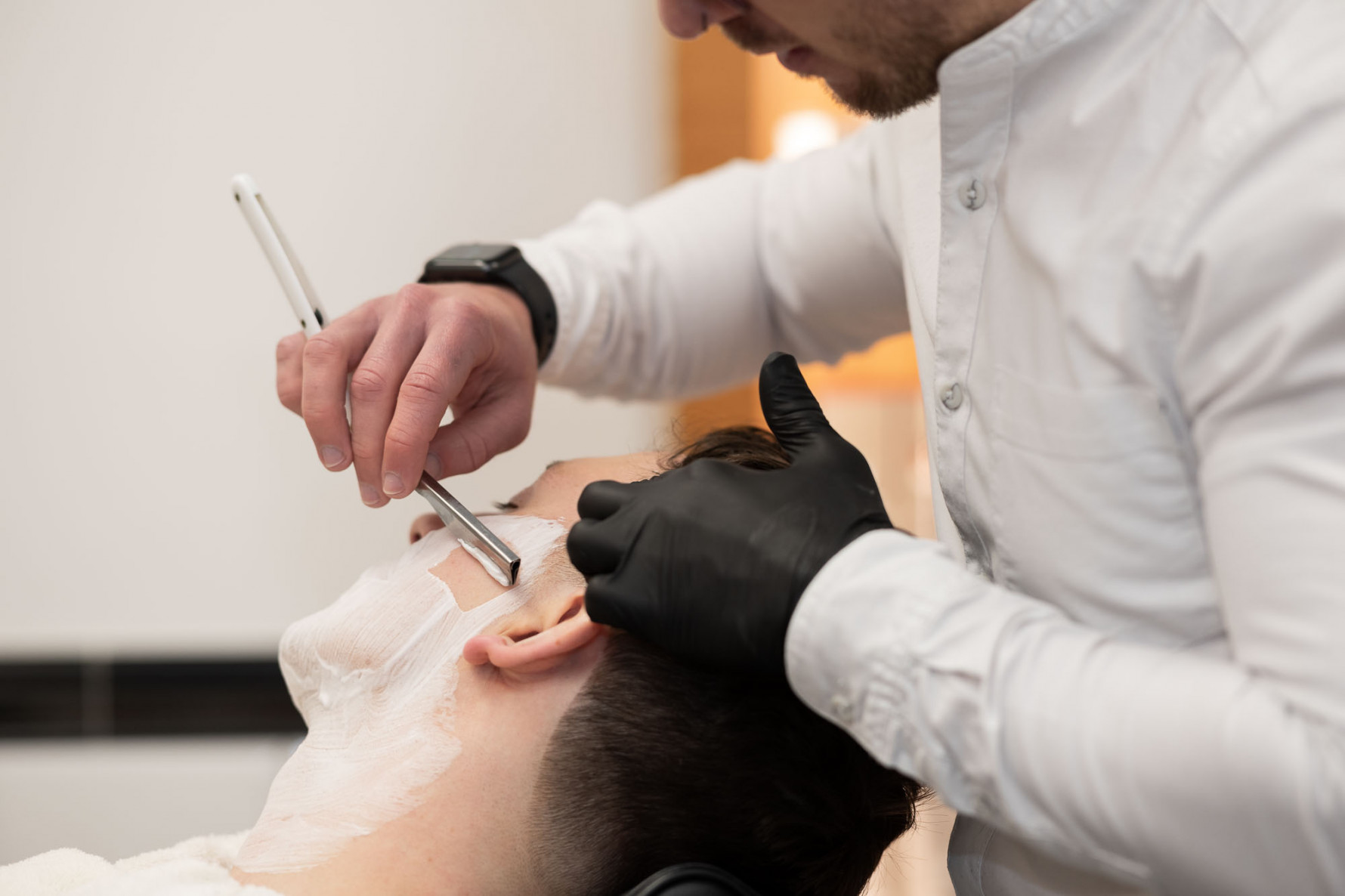 G as in Gesichtsrasur means…

… facial shave. What is considered as attractive is constantly renegotiated and this is why a smooth-face phase may follow after a bearded one. Interestingly, the notion of smoothness has changed, too. During the Middle Ages, six shaves a year were considered enough and even towards the end of the 19th century, a weekly shave would be perfect grooming. Only after the invention of the electric shaver, a daily shave became common. Whereas the facial shave is a masculine domain, the depilation of the body is more of a female one. And they also have a decreasing desire to use environmentally unfriendly plastic. The British women demonstrate this: they do not leave first-rate shaving tools to their husbands. Equality is happening – also in terms of fine shaving tools.

H as in hair tips

A good hairstyle and a proper shave have something in common: the quality of the tips of the hair is important. For a long time, the plucked hairs of a silver badger were considered best quality for a shaving brush. The hair of a badger is naturally tapered, which means that the tips are fine and smooth while the hairline is firmer. In order to make use of these properties in shaving brushes, careful alignment and shaping of the hair during the production of the brush is crucial. If the brush had to be trimmed after production to achieve the perfect shape, then the fine hair tips would be lost. By using synthetic hair, an even higher quality can be achieved. The difference between fine and super soft tips and a firm hairline is even greater here. Therefore, single hairs that may have been added to the brush upside down are removed with a pair of tweezers during production. These firm tips would otherwise prick the owner. 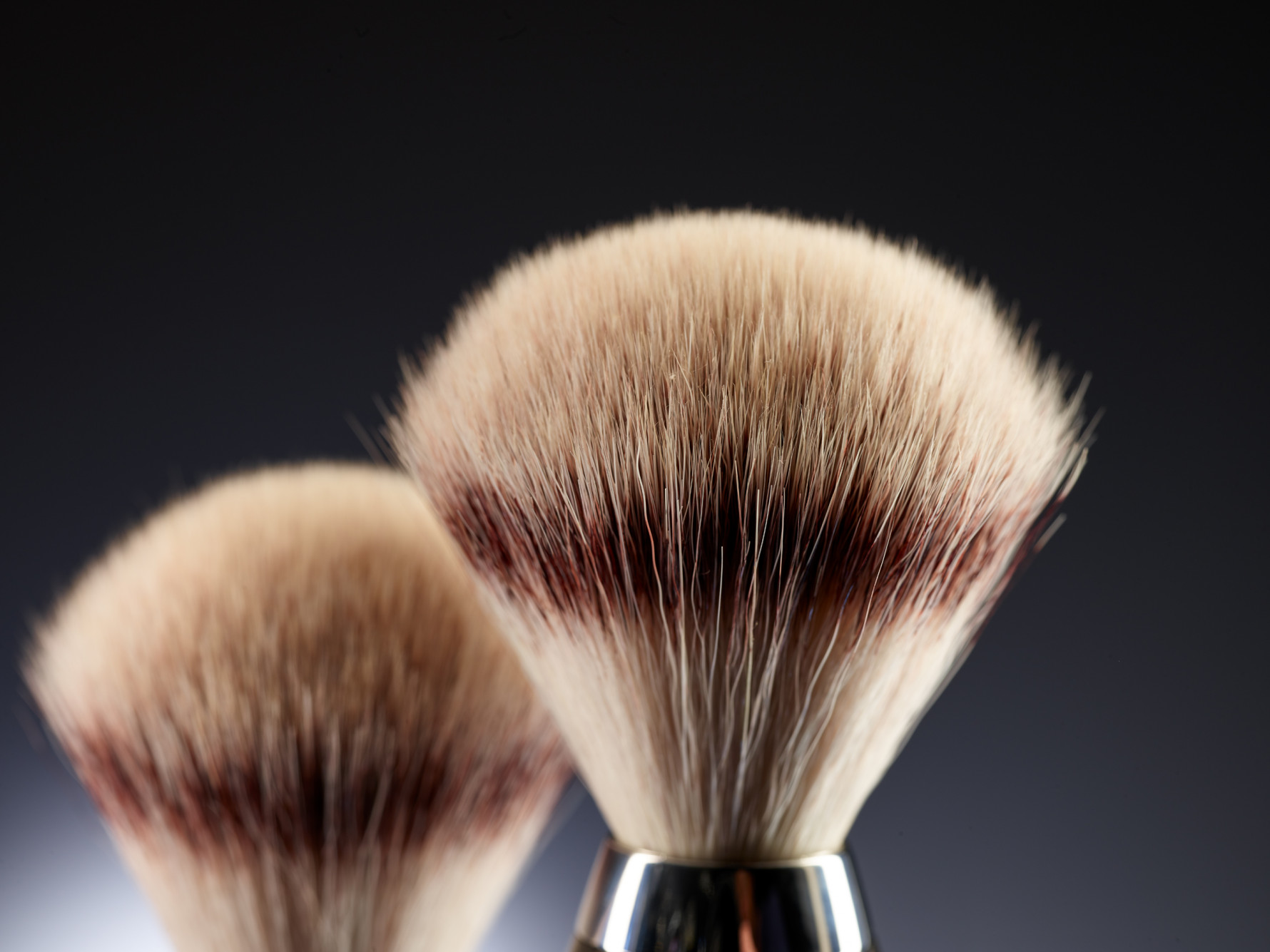 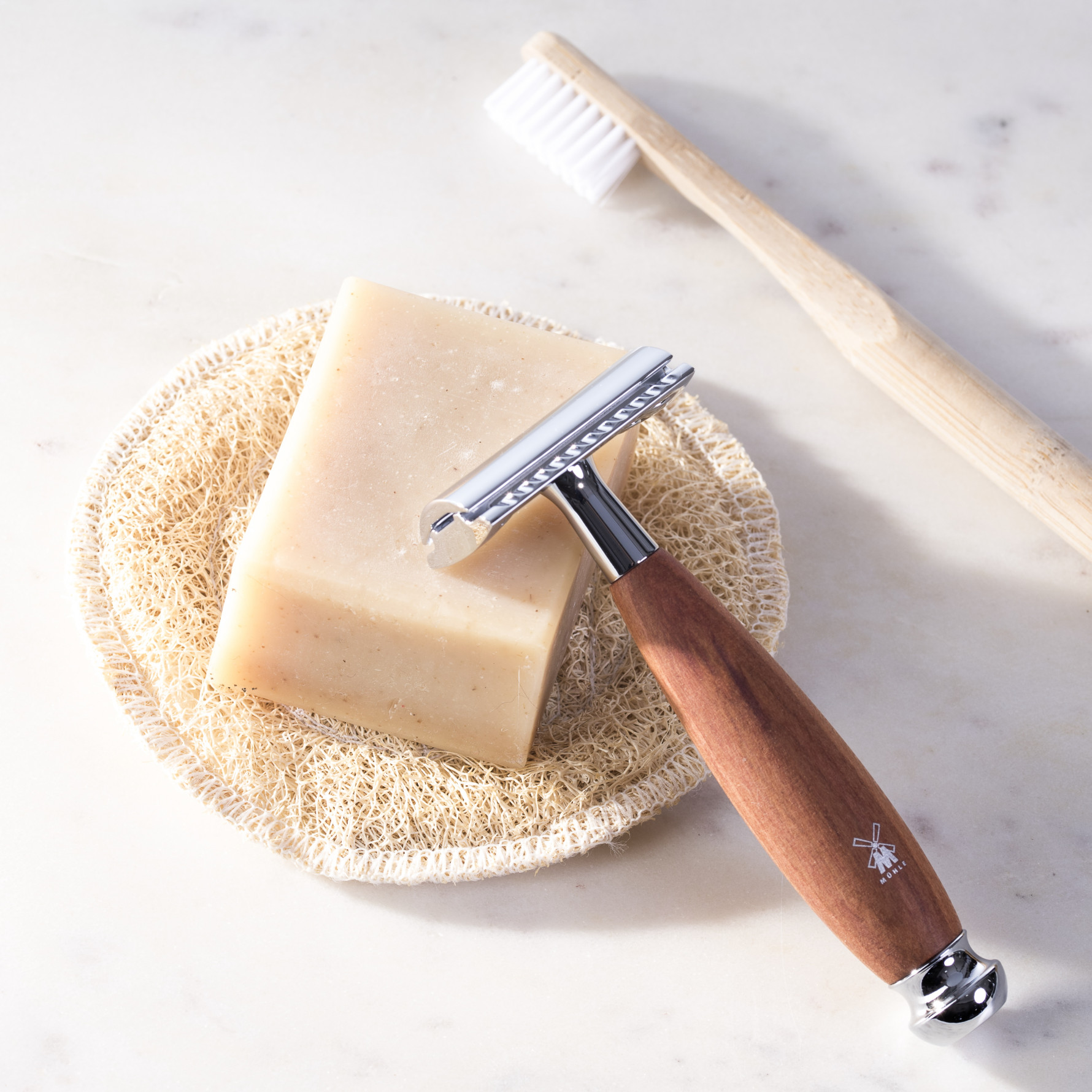 I as in initiation

Circumcision, tattooing, ordination of priests- it is customary in different cultures worldwide to carry out the admission of the young man into the circle of adults by means of a solemn ritual. Sometimes the first shave serves as such a rite of passage from child to man. "It is called "Keshanta" by the Hindus, " and "Barbatoria" was its name in ancient Rome. When Octavian, the later Emperor Augustus, invited Octavian to a public festival paid for from the state treasury in 39 B.C., he not only demonstrated his adulthood but also his claim to power. Even today the first shave is a special occasion - and it can become a special moment of communion between father and son. What the son learns about shaving from his father is more formative than any advertising or blog, as a study commissioned by Mühle has shown. Like father, like son.

J as in Juchten leather

Imagine a traditional shaving scene. In your mind’s eye, you might first see the barber stroking the razor several times over a leather strap before he turns to his customer’s carefully lathered chin. Rubbing the razor over the leather strap straightens the fine burr of the blade and gives it that little extra sharpness. In order to fulfil this purpose best, the leather that the strap is made of must have certain qualities. It must be supple yet firm and the surface should be a little rough. So-called Juchten leather is particularly suitable. It comes from cattle or calves that spend their lives in sandy plains. It originally came from Russia, which is why it’s also known as “Russian leather”. Over time, the animal’s skin absorbs more and more fine dust particles and therefore has the quality of very fine sandpaper when processed into leather. 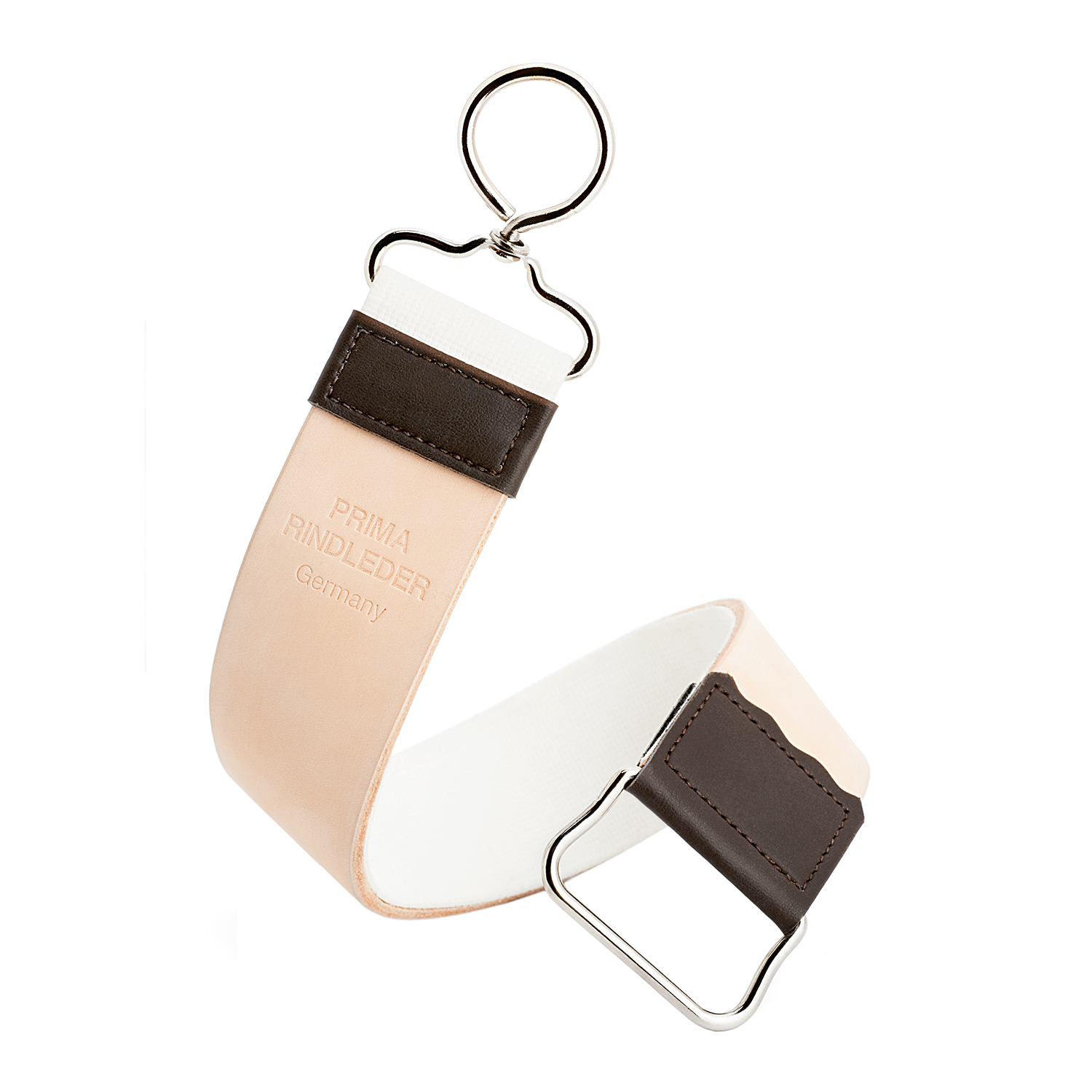 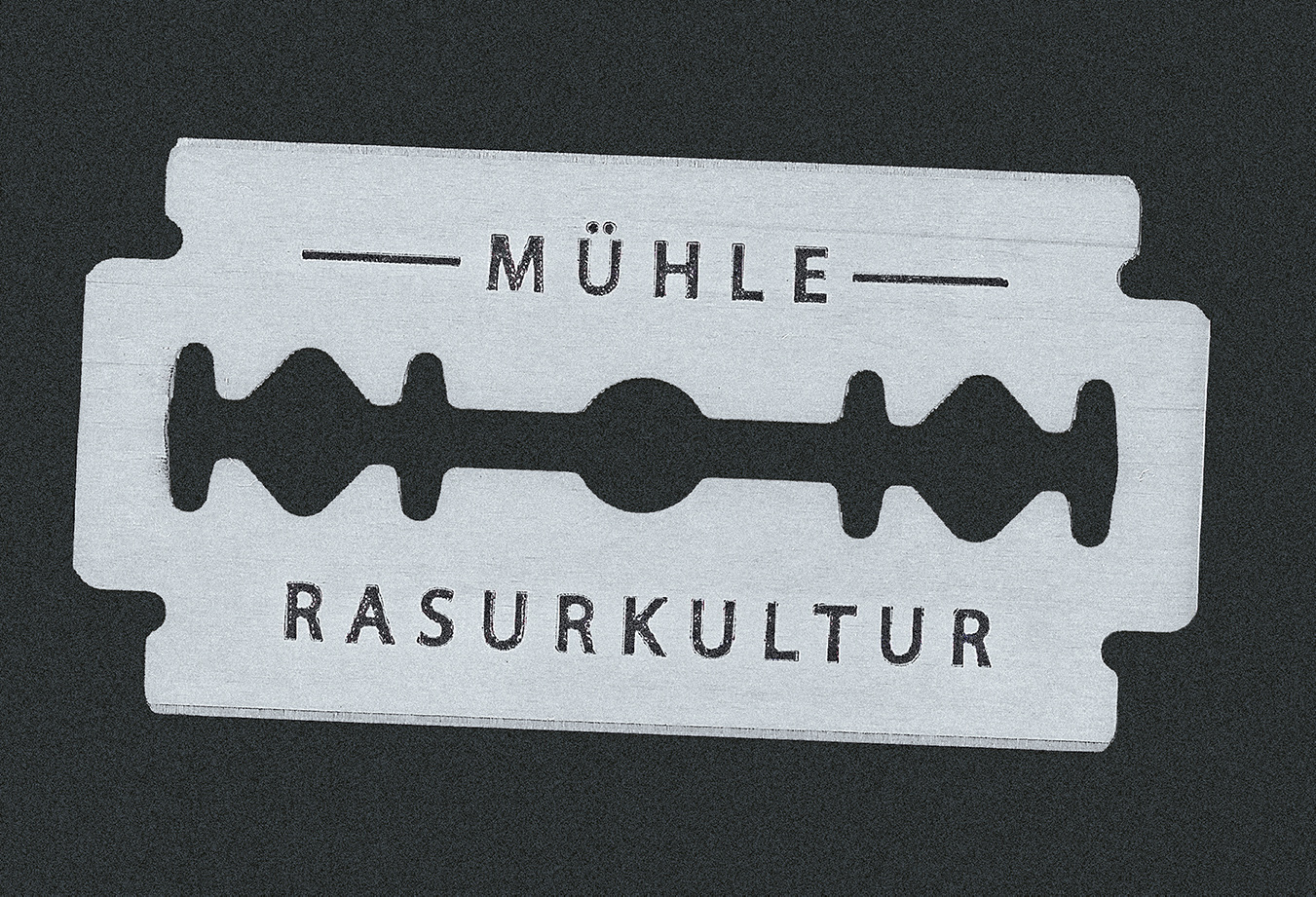 … Blade. The American travelling salesman King Camp Gillette wanted to get rich. The best way to achieve this goal, he thought, would be to invent a practical disposable product. This would guarantee demand for all eternity, he reasoned. Moreover, what if, instead of sharpening the blade of their straight razors – a precursor to today’s conventional safety razors – before each shave, he could convince men to use little thin steel plates with a double-edged blade that could be replaced as soon as they got blunt? It took a bit of tinkering before Gillette’s shaver with replaceable blades was finally patented in 1904. His innovation quickly caught on. The extent to which our throw-away society has evolved is reflected by the fact that the blade, which once entailed a great deal of waste, is now only a relatively small item in need of disposal – compared with multi-blade razors, which are disposed of in their entirety.

L for Let it grow!

They began to sprout about 15 years ago, and ten years ago they were already omnipresent: beards, beards, and more beards. Even Hollywood stars such as George Clooney and Brad Pitt temporarily took to hiding their handsome faces behind a lavish thatch of hair. Trends usually pass, but this one somehow didn’t. Beards have become established. Five o’clock shadow, designer beard, full beard – everything goes, and even in the business context being clean-shaved is no longer de rigueur. Oddly enough, this hasn’t made shaving products any less popular. On the contrary, with the focus on beard care and ubiquitous barbershops, interest in high-quality safety razors and brushes, in lathering up and closing pores, has also grown. It seems that men in general have found pleasure in devoting themselves to their faces with care and dedication – with or without hair. 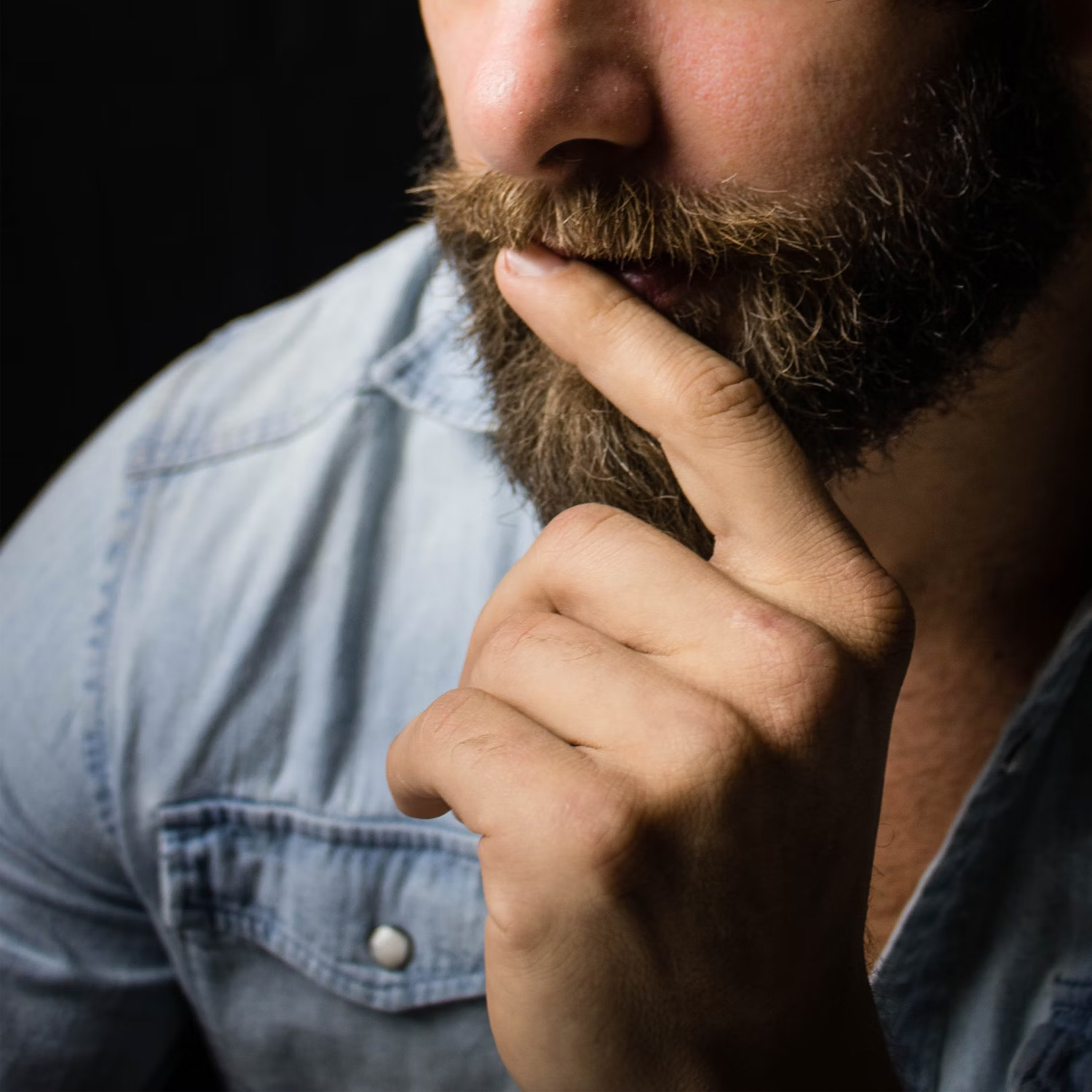 Are you looking for exclusive insights into the MÜHLE cosmos and current developments?

The MÜHLE newsletter is published quarterly and informs you about new products, wet shaving tips and special offers in the MÜHLE store.